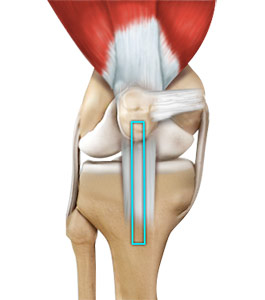 The goal of ACL reconstruction surgery is to tighten your knee and to restore its stability.

The torn ACL will be removed and the pathway for the new ACL is prepared. Your surgeon makes an incision over the patellar tendon and takes out the middle third of the patellar tendon, along with small plugs of bone where it is attached on each end. The remaining portions of the patellar tendon on either side of the graft are sutured back after its removal. Then the incision is closed. The arthroscope is reinserted into the knee joint through one of the small incisions. Small holes are drilled into the upper and lower leg bones where these bones come together at the knee joint. The holes form tunnels in your bone to accept the new graft. Then the graft is pulled through the predrilled holes in the tibia and femur. The new tendon is then fixed into the bone with screws to hold it into place while the ligament heals into the bone.

The incisions are then closed with sutures and a dressing is placed.

Following the surgery, rehabilitation begins immediately. A physical therapist will teach you specific exercises to strengthen your leg and restore knee movement. Avoid competitive sports for 5 to 6 months to allow the new graft to incorporate into the knee joint.

Possible risks and complications associated with ACL reconstruction with patellar tendon method include: